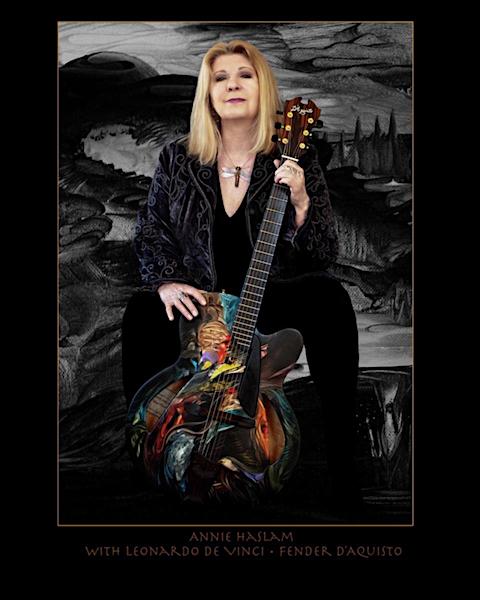 Annie Haslam
was born June 8, 1947 in Bolton, Lancashire county, England and is a vocalist, songwriter, and painter. She is best known since 1971, as the lead singer of the progressive rock band Renaissance and for her long and diverse solo singing career. She has a five-octave vocal range. From the year 2002, Haslam has developed a parallel career as a visual artist, producing paintings on canvas, painted musical instruments, and giclées.

Early History
Originally a fashion student in Cornwall, Annie worked for a Savile Row tailor in London, and then began voice coach instruction under opera singer Sybil Knight in 1970.

Career With Renaissance
In February 1971, she became the new lead singer of Renaissance, after answering an advertisement in the British periodical Melody Maker, and auditioning initially as a backup singer for the band in Surrey. It was stated by music critics of the day that “Annie Haslam’s voice, soaring high along with the melody, is the big news. Far more West End than Carnaby Street”, it would eventually come to define the band.

With Renaissance, Annie Haslam was the lead vocalist on seven studio albums during their classic period (1972–1979), four studio albums from 1981–present, and a number of live albums. For more information see the Renaissance Discography.

Solo Career
In 1977, Annie began her solo career with her album Annie in Wonderland, produced by Roy Wood who played most of the musical instruments, and who also duetted with her on one track, and also performed on the Intergalactic Touring Band album. Haslam and Wood were engaged to be married for four years, which she later described as “four of the funniest years of my life”. She has since released eight studio albums, three of which were released through her own record label, White Dove. She has also collaborated with Steve Howe Of the prog rock band Yes, on a number of projects.

Surviving Breast Cancer
In 1993 Haslam was diagnosed with breast cancer, which she survived and which became the inspiration for her 1994 album, Blessing in Disguise.

Her 2006 Live Studio Concert, was also released as her first solo DVD. Haslam released an EP called Night and Day, her first solo recording for some years, with Welsh rock band Magenta in 2006.

Visual Arts
“Haslam as few among us, is blessed to channel her muse in a variety of ways” wrote Melinda Rizzo in Fine Art Magazine. Annie has developed and refined her painting repertoire and scope continuously since beginning her prolific decade and a half painting career.

Festive Season Concerts
Since 1999, Haslam has every year performed a Christmas show called “In the Spirit of the Holidays”, originally showcasing at the Upper Tinicum Lutheran Church, and then in later years since 2006 at the larger Sellersville Theatre in Sellersville, Pennsylvania. The Christmas show was performed every year with the exception of 2012, due to the death of her close friend and colleague, Michael Dunford, in that November. Haslam stated that “there was just too much sadness at the time.” Included in the program are traditional Christmas carols, as well as Annie’s own compositions, and a number of solid Renaissance favourites.

Back in the 1970s and 1980s, along the US East Coast to include the New York City and Philadelphia areas, Renaissance enjoyed significant popularity and still has devoted audiences to this day. Because of this, Annie developed a love and fond familiarity with the area. Eventually she relocated from Surrey England where she lived prior to 1999, to Central Bucks County, Pennsylvania, where she currently resides.